Skip to content
Posted on January 25, 2018 by Hemley Gonzalez

Pope Apologizes to Abuse Victims but still Doubts Them.

For years, victims of sexual abuse in the Roman Catholic Church and their advocates have asked when Pope Francis would adjust his blind spot on an issue that has caused enormous damage to Catholics, the reputation of the church and the pontiffs who preceded him.

But the pope’s remarks overnight Sunday as he returned from a trip to Chile and Peru — apologizing for demanding proof of abuse from victims in Chile even as he continued to doubt them — prompted concerns that he just does not understand.

“There was great hope that this pope understood — he ‘got it’ — but if that were true we would not have his words today,” said Marie Collins, a survivor of abuse who last year resigned in frustration from the pope’s Pontifical Commission for the Protection of Minors.

“Anyone who was still clinging to the hope there would be real change in the church to the issue of abuse and this change would be led by Pope Francis will have lost that hope today,” Ms. Collins said.

At this point in his papacy, some supporters worry that the pope’s lackluster record on holding the church hierarchy accountable for its role in the abuse crisis could threaten to erode the moral authority and global popularity necessary for the pope to make progress on priorities in and out of the church.

On his flight back to Rome, Francis issued a rare apology for what he called a “slap in the face” to victims. He was referring to the crisis he had created in Chile when he said that he had seen no “proof” that a bishop covered up abuse.

“Here I have to apologize because the word ‘proof’ hurt them,” he said on the plane. “It hurt a lot of abused people.” He added: “I know how much they suffer. And to hear that the pope told them to their face that they need to bring a letter with proof?”

But then he wound up making an unclear distinction between proof and evidence, and offered a spirited defense of Bishop Juan Barros Madrid, the Chilean accused by some abuse victims of protecting the Rev. Fernando Karadima, a notorious Chilean pedophile priest.

Some of those victims have said Bishop Barros witnessed the abuse and did nothing, an accusation he denies.

The pope revealed that he had twice rejected the resignation of Bishop Barros in recent years, explaining that while an investigation continued into the bishop, whom he appointed to the small diocese of Osorno in 2015, “I cannot condemn him because I do not have the evidence.”

“But I am also convinced he is innocent,” the pope added.

The pope’s inaction and missteps on the issue seem to be drying up his once seemingly bottomless well of good will.

“If he wanted evidence, why didn’t he reach out to us when we were willing to reaffirm the testimony that not only us, but so many witnesses, have been providing for more than 15 years,” said Juan Carlos Cruz, a Chilean victim of sexual abuse by members of the clergy.

The death last month in Rome of Cardinal Bernard F. Law, the disgraced face of a complicit church hierarchy that enabled sexual abuse, drew attention in the Vatican to a rift on the issue. 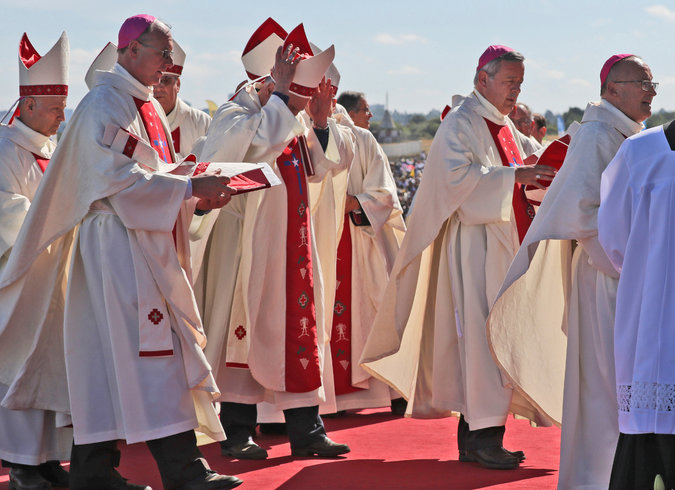 On one side are those who believe a policy of “zero tolerance” and accountability remain vital for the church’s credibility and the protection of minors. On the other are those who feel that the church has already done enough on the issue, and that the problem is behind them and has become a cudgel used by enemies of the church.

For some advocates, Pope Francis this week moved decisively into the second camp. The website BishopAccountability.orgsaid the pope had “turned back the clock to the darkest days of this crisis.” On Monday, the Survivors Network of Those Abused by Priests, or SNAP, said in a statement that “Pope Francis has made his true feelings known.”

Emiliano Fittipaldi, an Italian investigative reporter who has looked into sexual abuse and who is the author of the book “Lust,” said “for Francis, addressing sex abuse is priority in words, not actions.” He said the pope’s belief in zero tolerance seemed to evaporate when the accused were his friends.

“When it is people he knows and respects, like Barros, it’s really hard for him to accept the accusations,” Mr. Fittipaldi said. “In the Vatican they often say his people are protected.”

Many Vatican watchers have suggested that Francis is shaping up to be a less effective reformer on the issue than his conservative predecessor, Pope Benedict XVI, who kicked hundreds of priests out of the church.

When Francis was elected in 2013, advocates expressed unbridled optimism that he would take the crucial, and politically delicate, step of holding accountable bishops who covered up for pedophile priests.

That has not happened. The Vatican scrapped a proposed tribunal to try bishops. Francis brought to Rome Cardinal George Pell, who subsequently became the highest-ranking Roman Catholic prelate to be formally charged with sexual offenses.

In September, the Vatican recalled Msgr. Carlo Alberto Capella, a high-ranking priest working as a diplomat in the Holy See’s embassy in Washington, after American authorities sought to strip his immunity and potentially charge him with possession of child pornography.

Last month, the three-year terms of members of the Pontifical Commission for the Protection of Minors, which the pope created in 2014, expired without any news of renewed terms or appointments. Ms. Collins and another abuse survivor on the commission resigned. The pope said on the plane that he had received a list of possible new members and called the delay “normal.”

Cardinal Sean O’Malley, the archbishop of Boston — Cardinal Law’s old diocese and ground zero for the global sexual abuse crisis — leads the commission. After the pope’s defense of Bishop Barros, Cardinal O’Malley released an extraordinary statement chastising the pontiff for doubting victims, calling it “a source of great pain for survivors” that relegates them “to discredited exile.”

On the plane, Francis thanked Cardinal O’Malley for the statement, calling it “very just,” and he defended his own record on the issue. He said that since the start of his pontificate he had refused to sign “even one” request for a pardon from about 25 pedophile priests.

He sought to turn back the clock to happier days, reminding reporters that he landed in Chile expressing “pain and shame”for children abused by priests.

But many advocates for victims heard less truth in those prepared remarks than in the pope’s off-the-cuff response to a Chilean reporter’s question about whether Bishop Barros was complicit in covering up crimes of abuse.

“The day someone brings me proof against Bishop Barros, then I will talk,” Francis said before celebrating Mass outside the northern Chilean city of Iquique. “But there is not one single piece of evidence. It is all slander. Is that clear?”

On Sunday, the pope reiterated his doubts.

“He is showing a very different attitude to those who have been abused,” Ms. Collins said.