Skip to content
Posted on April 5, 2018 by Hemley Gonzalez

Relatives of the men were cross-examined by Pell’s defence team on Friday. Further description of the charges against Pell cannot be given for legal reasons. The mother of one of the complainants, who cannot be named for legal reasons, gave evidence to the court via video link. 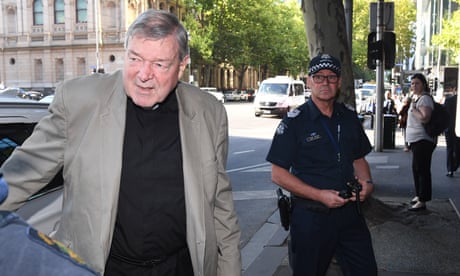 Pell’s barrister, Robert Richter, asked her about what she recalled while watching her son swimming at the pool. The court heard that after swimming laps Pell would go to the free-play area of the pool where children would play games with him, including being thrown through the air by Pell.

Richter told the mother: “You never observed anything untoward happening”.

“No,” she replied, “because we trusted priests”.

Richter also put it to her that at the time she thought Pell was a “nice man” because he would stay around after swimming laps play in the pool with her children and others.

“I don’t remember thinking that,” the mother replied.

The woman made a signed statement to police in 2015 after one of her son’s friends from that time accused Pell of a sexual offence. The friend has since died, which led to prosecutors withdrawing a charge against Pell before the committal hearing began. Her son then also made allegations against Pell, which the woman said was the first she heard of them. She said when she tried to ask her son for details about it, all he said was “yeah, it was bad”.

Richter put it to her that the comment about the abuse being “bad” was in reference to someone else who allegedly perpetrated a sexual offence against her son. The woman responded he had been talking about what had happened to him at the pool.

Pell, who is 76, is the highest-ranking Vatican official to be charged in the Catholic church’s long-running sexual abuse scandal. He has taken leave from a position in the Vatican to attend court. He has strenuously denied all allegations.

When the hearing adjourns next Thursday afternoon magistrate Belinda Wallington will need to decide if there is enough evidence to order Pell to stand trial accused of historical sexual offences. Her decision is expected sometime in April.