Skip to content
Posted on April 25, 2019 by Hemley Gonzalez

France called on the Vatican to take action on Friday and revoke the diplomatic immunity of its envoy to Paris after sex abuse charges were filed against him.

Italian-born Ventura has been based in Paris since 2009 and serves as a diplomat for Pope Francis.

From 2001 to 2009 he served as the Vatican envoy to Canada, where he is also being investigated for alleged sexual assault.

‘I am waiting for the Holy See to assume its responsibilities,’ French European Minister Nathalie Loiseau told CNEWS television when asked if Ventura should see his diplomatic immunity lifted.

‘At this stage he (Ventura) has diplomatic immunity, but the Holy See obviously knows about the serious charges against the nuncio, and I have no doubt the Vatican will take the right decision,’ Loiseau said.

Ventura is accused of molesting a man at the town hall in Paris on January 17 when Mayor Anne Hidalgo gave a New Year’s address to diplomats, religious leaders and civil society figures.

‘During the ceremony, a city employee was repeatedly groped on the backside, in three instances, once in front of a witness,’ a town hall source said.

‘It was quickly decided to report the matter to the public prosecutor,’ said Patrick Klugman, deputy mayor responsible for international relations.

Prosecutors launched a probe into the alleged ‘sexual aggression’ on January 25 – a day after the mayor’s office filed a complaint.

A similar complaint has also been filed by a former Paris city employee for a case that allegedly took place a year ago, city hall officials said. 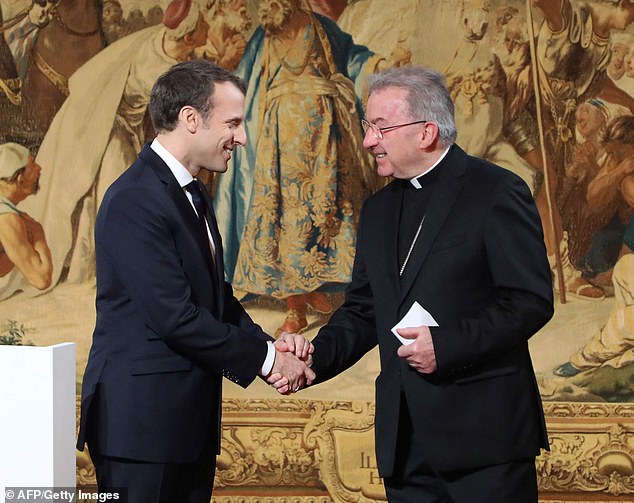 Ventura has been based in Paris since 2009 and serves as a diplomat for Pope Francis. He is pictured with French President Emmanuel Macron in January last year

‘If the facts are proven, they are very serious because when you are a religious leader you are supposed to have a moral authority, so I would say that’s an aggravating circumstance,’ Loiseau added.

Ventura also faces a groping accusation filed in Ottawa. The man registered his complaint last week at the Vatican embassy in the Canadian capital after learning of the accusations against Ventura in France.

According to the Canadian website Presence, which specialises in religious news and first reported on the complaint, Ventura allegedly groped a man in 2008 at the shrine of Sainte-Anne-de-Beaupre in Quebec province.

The alleged victim, then 32, was helping to serve Ventura during a banquet for the Feast of Sainte Anne. The man said that Ventura touched his buttocks at least twice, according to Presence.

The embassy said on Thursday that the complaint has been reported to officials in Vatican City.

Ventura previously also served in Brazil, Bolivia and Britain before being appointed papal nuncio to Ivory Coast, Burkina Faso and Niger, Chile and then Canada.

Catholic clerics have been denounced in countries as far afield as Australia, Brazil, Chile, Ireland and the United States, prompting pledges from Pope Francis to rid the church of a scourge that has done enormous damage to its standing.

The pope has vowed that the Catholic Church will no longer ignore abuse allegations, and he removed two prominent cardinals from his inner circle late last year after they were tainted by paedophile scandals. 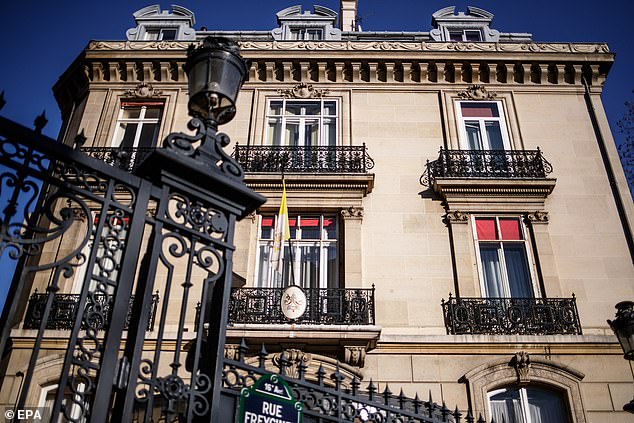 France’s Catholic Church has seen its share of scandals in recent years.

On March 7, a court in Lyon is due to give its verdict in the case of Philippe Barbarin, the southeastern city’s 68-year-old archbishop, and five former aides, all of whom are accused of covering up the sexual abuse of former boy scouts by a priest.

That priest, 73-year-old Bernard Preynat, was charged in 2016 with assault cases going back more than 20 years. He is expected to be tried later this year.

French filmmaker Francois Ozon made a film related to the case, and a court will decide on Monday whether it can go on public release ahead of Preynat’s trial.

In the past, the Vatican – in line with diplomatic custom – has recalled any representatives implicated in scandal.

In 2012, for example, Polish archbishop Jozef Wesolowski was secretly recalled as papal nuncio from the Dominican Republic following reports he paid for sexual encounters with children.

The Vatican refused to extradite him to Poland for trial, but an ecclesiastical court found him guilty and he was defrocked in June 2014.

The Church decided to further try him on criminal charges, but he died following a cardiac arrest in August 2015 before the trial opened. He was 67.

In another case however Australian Cardinal George Pell, a close aide to the pope, last year returned from the Vatican to Australia to face child sex charges.

Pell was not covered by diplomatic immunity in that case.