Skip to content
Posted on August 21, 2019 by Hemley Gonzalez

Former Vatican treasurer George Pell will remain in prison after an Australian appeals court rejected the disgraced cardinal’s appeal against his conviction for sexually assaulting two 13-year-old choirboys in the mid-1990s.

The most senior Catholic official to be convicted of child sexual assault, Pell was sentenced in March to six years in prison, with a non-parole period of three years and eight months, for an attack described by Chief Judge Peter Kidd as “breathtakingly arrogant.”
Lawyers for the 78-year-old cardinal immediately appealed his conviction, and in June presented 13 “solid obstacles” to a guilty verdict on all five charges, including that it was “not possible” for Pell to be alone while robed after Sunday mass and for no one to notice the boys were missing at that time.
On Wednesday, the panel of three senior judges rejected that submission, accepting that it was possible for the jury to have found Pell guilty beyond reasonable doubt, based on the evidence presented at Pell’s five-week trial last December.
“There has been vigorous and sometimes emotional criticism of the Cardinal and he has been publicly vilified in some sections of the community,” a summary of the judgment read.
“It is fair to say that his case has divided the community.”
From the dock in court 15, Pell showed little reaction as Chief Justice Anne Ferguson delivered Wednesday’s verdict, which followed more than two months of deliberation between three judges who returned a ruling with vote two for and one against. Pell listened intently during the summary, staring straight at the judge.
Members of the public, campaigners against child sex abuse and supporters of the church had lined up early to get a seat in the packed courtroom to hear whether Pell would be released or face a possible re-trial on five charges — one count of sexual penetration of a child and four counts of committing an indecent act with a child. 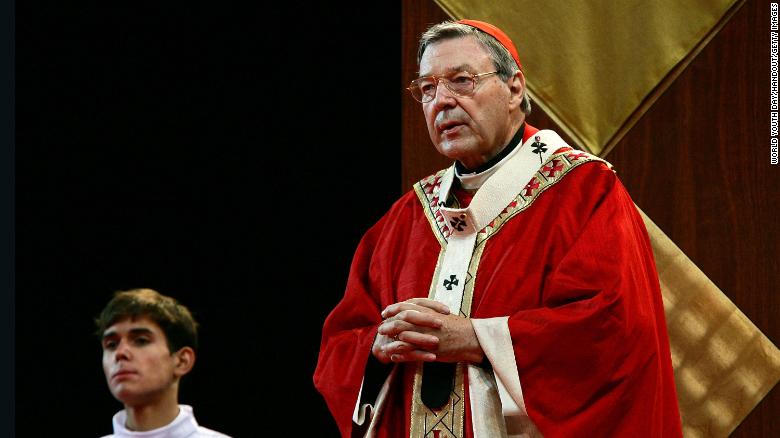 Cardinal George Pell is seen addressing the audience during the Opening Mass of Welcome of World Youth Day Sydney 2008 at Barangaroo on July 15, 2008 in Sydney, Australia.

Wednesday’s ruling marks another twist in a story that has gripped the global Catholic community since Pell’s conviction was reported in February. Before that, reporting of his trial and verdict had been suppressed to avoid prejudicing a third potential trial, relating to different charges, that was subsequently dropped.
Pell was convicted by a 12-member jury in December, largely on the testimony of one accuser, a man now in his 30s who, as an alleged sex abuse victim, can’t be identified under Australian law. The second alleged victim died several years ago having never told anyone about the alleged attack. It was Pell’s second trial on the same charges — the first trial, also held in secret, ended in a hung jury after the jurors failed to agree on a verdict. 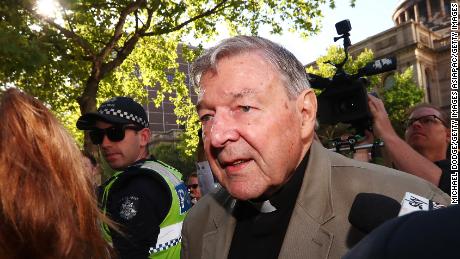 In taped evidence played to a closed court — to only the judge and the jury — the man told how he and his friend had snuck away from the rest of the choir to drink wine in the priest’s sacristy after mass one Sunday. Both were 13 years old at the time.
The man told the court Pell had caught them drinking wine and said something like “you’re in trouble,” according to Judge Kidd’s summary of the case. Pell then started moving something under his robe, the man said, before he sexually assaulted them, one after the other, Judge Kidd’s sentencing notes said. During the ordeal, which lasted five to six minutes, the boys were “sobbing,” the man said in his testimony. At one stage, Pell told them to be quiet, “because they were crying,” Judge Kidd recounted.
Neither boy told anyone about the ordeal, until 2015 when the man approached Victoria Police to file a formal complaint. By then, he had attended the funeral of his former friend, who had died from an accidental overdose after years of drug abuse.

At the appeal hearing in June, Pell’s lawyer Bret Walker SC presented a long list of reasons why it was “not possible” for Pell to have committed the alleged attack. He said Pell, as a new archbishop, regularly met congregants at the side of the church after mass.
“If he was at the western door during that time, then the law of physics tells us this is literally, logically impossible, for the offending to have occurred,” Walker said.
In their written submission, Pell’s lawyers said centuries-old Church law dictated that bishops shouldn’t be left alone in their robes. Furthermore, it was “not possible” that no one noticed the boys slip away from or re-join the choir procession, the lawyers argued.
They also cast doubt on the man’s account. “The complainant’s account was not simply implausible, he also changed it repeatedly in critical ways, when he was presented with facts which exposed its impossibility.”
The crown prosecution countered that “the evidence given by the complainant was not only plausible, it was credible, clear and entirely believable, as reflected in the jury’s verdict.”
Pell’s lawyers also appealed the conviction on two other grounds, which would have led to a potential a re-trial. Pell’s team said they should have been allowed to show animated video during the trial summing up to indicate the movements of people within the church during the alleged attack. They also said Pell should have been asked to make his not guilty plea in the presence of the jury, which didn’t happen.
The Catholic Church is yet to comment on Wednesday’s ruling. A Vatican spokesman told CNN on Monday that the church “awaits the results of the ongoing process and the decisions of civil justice before dealing with the case.” When Pell’s guilty verdict was made public, the Vatican said it would launch its own investigation into Pell.
Pell was granted leave from the Vatican to contest the charges. In February, after his conviction became public, the Church confirmed that his position as the prefect of its secretariat for the economy had not been renewed. And, along with two other cardinals, Pell lost his place on the Pope’s small council of advisers last year, which the Vatican attributed to his advancing age.
Pell has 28 days to appeal Wednesday’s ruling in Australia’s High Court, the country’s highest-ranking court. Any ruling made there would be final and not subject to appeal.
Source: https://cnn.it/2KWk5F6